posted under category: ColdFusion on May 23, 2011 by Nathan

Oh no, the last day!

Early on, I went to What is Function Programming with Sean Corfield
Slides 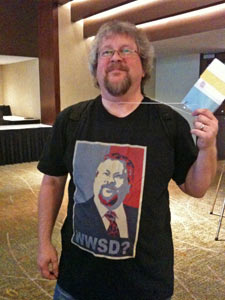 I get it, finally. Not that I hadn’t seen FP before, not that I hadn’t had it explained before, not that I am going to start writing clojure today, but now, at least, I get it. Here’s the short answer. The strength in functional programming comes down to map and reduce, and to having very limited side effects except for transforming the data - this explains why it’s great for testing, for thread safety and thus parallelization. Sean is always great to listen to, and it’s usually about something cutting-edge, pushing us over the cliff so we can try our wings. As a bonus, we also had an interesting discussion about closures versus anonymous functions (hint: it’s about context) that we got to continue at lunch.

Next I went to Relax with CouchDB by Mark Drew
Slides (pdf)
Mark went briefly over NoSQL databases, which made me wish I saw Peter Bell’s NoSQL talk on Thursday. I picked up everything I could during his brief NoSQL discussion, I especially liked the slide on the CAP Theorum, with what category databases fall into (you can see it here). Mark is funny on stage. He keeps the crowd awake by throwing things at them. Candy, USB drives, toys, etc. It’s entertaining (and dangerous). CouchDB looks like an awesome product, and Mark made a really nice case for it. It’s essentially a document database with a REST interface. He showed it returning a lot of JSON, but I’m sure it can do more.

Before lunch I sat in on Just Mock It with Louis Majano
Slides (pdf)
I saw this at the MAX unconference tent, but a couple things have changed - I am developing for CF9 now instead of CF6, so a mocking framework is feasible, and MockBox version 1.3 was released, so I was hoping to see something new. I didn’t see anything new, so that was a bummer. What I got instead was a refresher course on MockBox and some tips on unit testing, not a loss at all. Mocking is an important topic when you talk about unit testing. Some tips I got were to make a 1:1 relationship from components to test components, remember to test private methods, with mocking you can test what happens when another component throws an error, and a good source for unit testing examples is ColdBox’s test suite. Final note, it’s easy to get lost in Louis’ fantastic accent!

A scene from Lunch

After lunch was Time Management for Developers by David Shepherd
No slides
David gave the case for using Mylyn in Eclipse, and showed how it works. Unfortunately I was underwhelmed by the presentation, I don’t know what it was about it, maybe just because he was sitting for it, maybe because it was right after lunch. Even still, Mylyn gets a win. It lets you keep context while you switch between tasks, it lets you share your context with other developers, and it integrates your tasks with bug and task tracking systems. Cool product. I’ve already started trying it out!

Finally, the last session, I went to AngularJS with Elliott Sprehn
No slides
Elliott was the one who talked me into writing my session notes on this blog. I have to say I was overwhelmed by Angular. I told him afterward that for a bit, it felt like he was just telling us everything we wanted to hear, it was too good to be true: How would you like a javascript framework that works with jQuery, gives you includes and templating, dynamic variables, 2-way data binding, magical mustache expressions, unicorns and rainbows, total extensibility, ORM over REST, MVC for JS, mocking and unit testing, free beverages for life and a friendly DSL for writing tests, plus it’s smaller than jQuery and written by Google. Yeah, that’s AngularJS. Basically, I think he was trying to blow us away in order to get us to try it out. It worked. I am now getting familiar with the double-magical-mustache syntax. I just need a project to put it in. You should look into it yourself.

To summarize CF.Objective() 2011 for me, I will say that I met a ton of amazing people, talked about a lot of programming, learned a huge amount of things, shared ideas with the best minds in ColdFusion and was blown away with the things some people are doing with this technology. CF.Objective() truly made me a better developer. My take on the conference is that they billed themselves as the conference for enterprise ColdFusion development, and they delivered.

Thanks to the organizers, the speakers, the other attendees and the sponsors! You are all doing great stuff. Believe it!