posted under category: Software Quality on March 21, 2016 by Nathan

Something that comes up from time to time is the idea of reusable software, and why can’t we really reuse things that other people wrote. It’s a mystery. Robert Glass, a programming legend who worked at my company (1965-1982) said this:

Now we like to think we’re so much better off. Look at cave man. He can’t reuse software. He can’t even boil an egg. Look at us now. We have mechanical egg poachers and GitHub and NPM.

Using a library (jQuery, Bootstrap, React) is still “reuse-in-the-small.” Bigger reuse means more homogenization, and all programmers have not-invented-here syndrome to some degree that usually teeters between healthy and unhealthy. We like our own software because we know how it works, we know how to fix it, and it works exactly how we want it. We don’t like pre-written software that we can’t control.

Living in the world of StackOverflow and GitHub, I believe that we can extrapolate Glass’s statements even further. It looks like this: 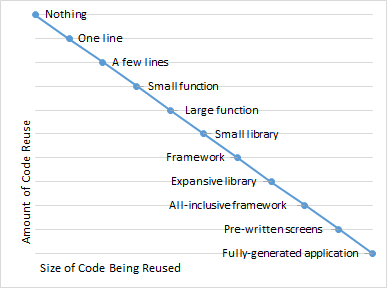 amount of code reuse by the size of code being shared
That’s why programmers lose their minds when they see something like Ruby on Rails that generates a working MVC app based on some database tables. Of course the reality ends up being something different, but you could almost hear the internet erupting with excitement back when Rails was first introduced.